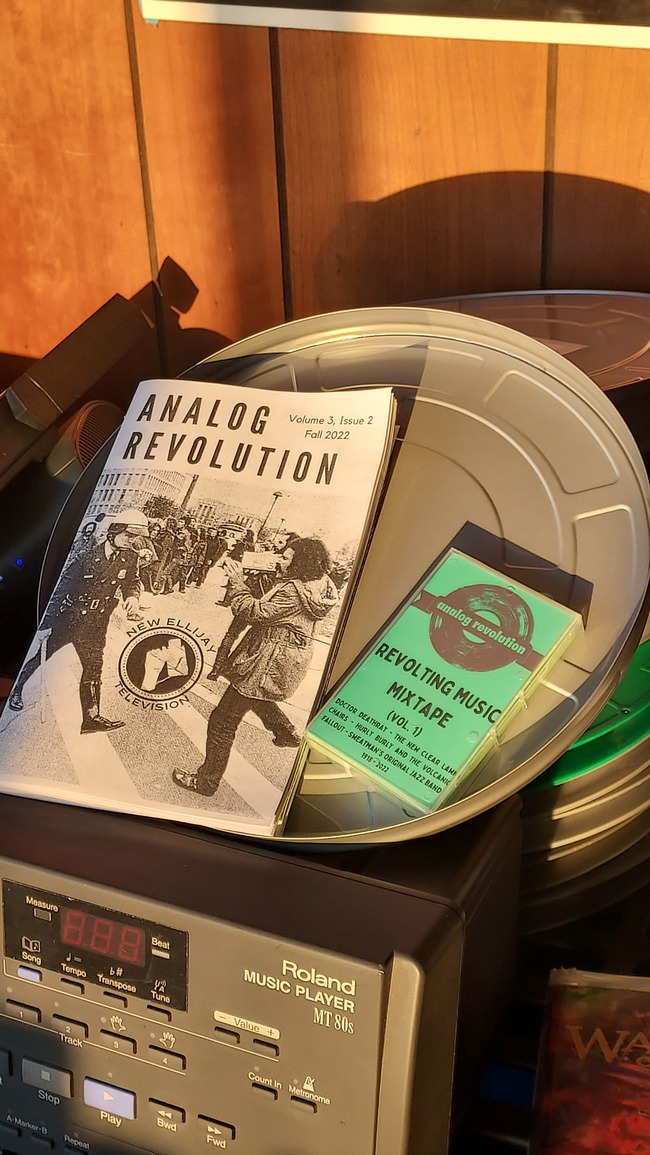 We should release Jupiter's Ghost on Minidisc.

and the #JupitersGhost #cassette is also available on our toystory: https://www.mountaintowntoys.com/product-category/jg/

which brings me to our toy store.

If you've been hankerin' for more #JupitersGhost or you just want to support our production thereof, we're selling a cassette of the first two episodes and a small amount of bonus content: https://analogrevolution.bandcamp.com/album/jupiters-ghost-episodes-1-2

It's an hour of weird, funny, occasionally touching science fiction.

Or we won't, it depends on a dozen other things.

I'm going to try to make this my no-corporate-services box. I'm going to configure the thing in an intentionally limited fashion.

I don't want to do it, but I think I will install firefox. I'm doing enough Wordpress stuff with #jupitersGhost that I don't think I can get away without it.

But I'm going to set the thing up so that Firefox is not the default browser. I'm looking at Dillo, but maybe it'll be Netsurf. Whichever one seems more stable on the hardware.

Even that won't really be my default browser, because the whole point of a Non-corporate box is that I'm focusing on small tech.

I also started laying out a #JupitersGhost #Zine today.

This is a rough copy printed on our cheap printer on copy paper.

When we make it for real, it will get printed on the nicer printer and on a high gloss magazine paper.

I still need to price out how much that's going to cost us, but uhhh it won't be cheap look at all that ink.

Regardless, it *looks* wonderful.

If you want to contribute short fiction, illustrations, poetry, or other material to this #JG zine please do reach out. I'd love to see it.

(most illustrations by @extinct, the two ugly ones are not.)

I'm working on a Zine set in the Jupiter's Ghost universe. If you'd like to submit illustrations, short fiction, or other stuff let me know!

Looking to get this zine finished within two weeks.

I had forgotten a lot about this thing, but this is the bit that hurts the most.

After listening to the first episode (or possibly watching the first cartoon) of #JupitersGhost, my dad reached out to me to see if he could participate.

Now, I don't know why my father doesn't just make an account and join in. He can use a computer, after all.

But he asked for us to help him write a character for the next episode, so I'll work on that.

A few weeks ago, I recorded some thoughts about why @jandrews joined the Space Corps.

It's a short little aside that is intended to build the universe, but doesn't fit in any specific episode.

We have a separate feed for these kinds of things, so I shared it there.

If you've been curious about what #JupitersGhost is supposed to be, this is a slightly more serious introduction to what these stories are all about.

After a day's work, the pilot for the Cartoon universe of #JupitersGhost is now live: https://vod.newellijay.tv/w/hx7PGjW5YqTG8c6q4nrD7R

It's a little rough around the edges still, but I think it's a good proof of concept of what this show might be like as a cartoon, and it gives us a chance to find out if that resonates with the people who listen to our podcast.

I'm having so much fun with #JupitersGhost

Episode two will be out any day now (we're working on the transcript right now, and I need to record the closing credits and tweak some levels) and we've started work on Episode 3.

We have some great illustrations coming in from multiple people, we have a cartoon in the works.

And I'm just kind of Buzzing with excitement over what other kinds of adventures we can get up to with this #creativeCommons #scifi universe.

I just received the last pending contribution for episode two of #JupitersGhost, so I'll be editing that out this weekend!

I'm pumped, this has been a lot of fun, and we have some really great contributions going in to episode two.

It's time for #JupitersGhost music.

When can we do that?

When we go to #assemblyrequired in asheville, we'll be publicly selling the first #JupitersGhost toys, too! We're doing a Frequency 650 action figure. He'll be ~10" tall, and if I can pull it off in time, he'll talk.

I love my work ( #JupitersGhost #newellijaytelevision #AnalogRevolution @MountainTownToys
Coffee Roasting, Magazine publishing, toy making, etc. etc.) but my day job just pays the bills, and I'm ready for there to be fewer bills.

I'm going to keep talking about #JupitersGhost for the next few weeks, because I'm excited about it.

If this kind of self promotion bothers you, now is probably a good time to filter me.

I'll slow down towards the end of the month, probably, but I'm still deep in New Shiny.

We have lots of Other stuff happening right now, too. We're releasing new albums through #analogrevolution, there's a new Magazine out soon, we're booking shows, we're planning live Television and pre-recorded television. We're building toys for a toy show in Asheville in Feb, a toy show in Ellijay in late Feb, and a toy show in Atlanta in March.

And, hopefully, we'll be roasting coffee within the next three weeks.

So, you know, there's a lot of stuff happening and I'll be promoting the hell out of all of it.

If y'all would like to keep up with my #JupitersGhost adventures, I've created an in universe account at @jandrews

Just finished writing the custom CSS, and I think it looks pretty snazzy.